Strengthening Insolvency Systems in Asia and the Pacific 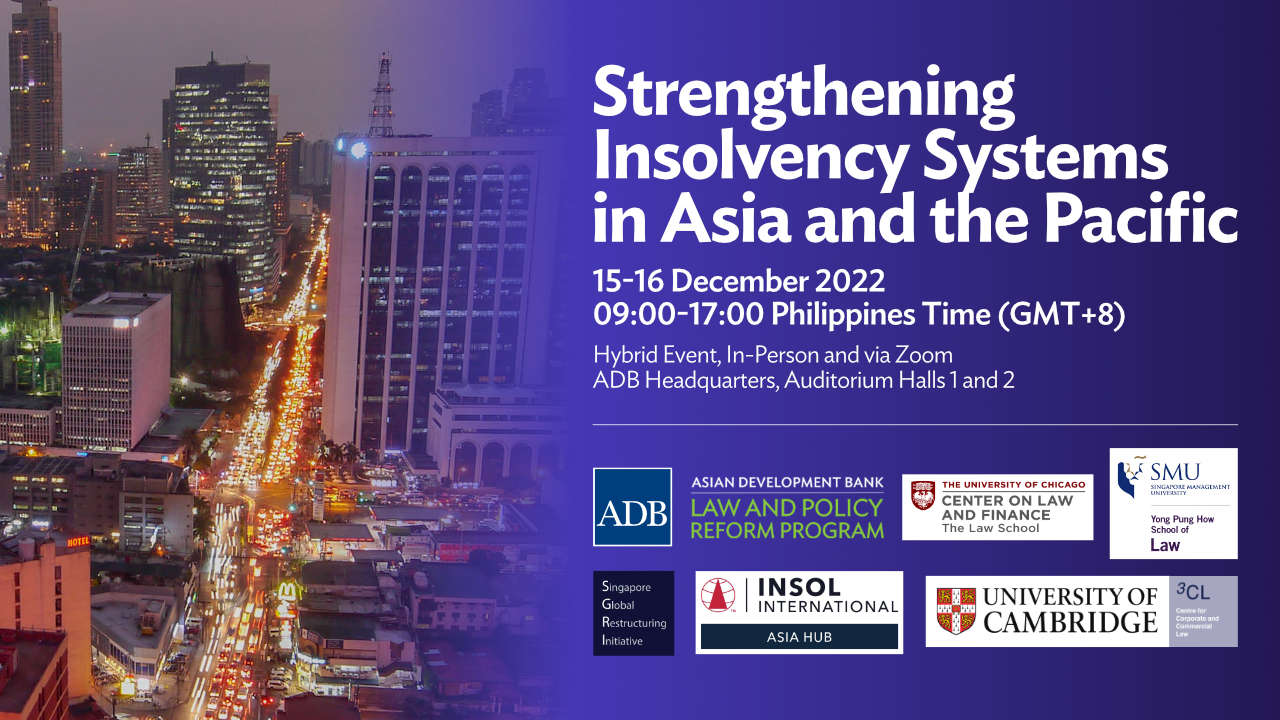 A well-functioning insolvency system is essential for the competitiveness and growth of an economy. Yet, many countries in Asia and the Pacific still have inefficient insolvency frameworks. The lack of an attractive legal, market and institutional environment to deal with financial distress may hamper entrepreneurship, access to finance and economic growth. Additionally, a weak insolvency framework may increase the level of non-performing loans in the banking sector. If so, it can end up jeopardizing the stability of the financial system and even lead to sovereign debt issues.

The Asian Development Bank, INSOL International, Singapore Management University, The University of Cambridge's Centre for Corporate and Commercial Law, and The University of Chicago's Center on Law and Finance will convene the Strengthening Insolvency Systems in Asia and the Pacific Conference on 15–16 December 2022. Gathering industry experts and academics, this event seeks to analyze how countries in Asia and the Pacific can strengthen their insolvency and restructuring frameworks, taking into account the legal, market, and institutional features existing in a particular jurisdiction.

14:00 – 15:30: Panel 5 - Valuation of Assets and Treatment of Claims and Contracts in Insolvency Proceedings
Chair: Anthony Casey, Deputy Dean and Donald Ephraim Professor of Law and Economics, The University of Chicago Law School

15:50 – 16:50: Panel 6 - Directors’ Duties and Liability in the Zone of Insolvency
Chair: Felix Steffek, Associate Professor, Faculty of Law of the University of Cambridge

Panel 1: Strategies to Effectively Promote Workouts
An out-of-court restructuring (“workout”) provides several advantages, including flexibility, confidentiality, and saving the costs and stigma associated with insolvency proceedings. Therefore, promoting the use of workouts is generally considered a desirable practice, especially in countries without efficient insolvency frameworks. However, for a variety of reasons, including opportunistic behavior of debtors and creditors, regulatory barriers, and lack of a rescue culture, completing a workout is often challenging even for viable companies only facing financial trouble. For that reason, regulators or private actors may be required to adopt certain practices to effectively promote workouts. To that end, jurisdictions around the world have adopted several approaches, including: (i) the publication of good practices for workouts by association of banks or insolvency practitioners; (ii) the enactment of good practices and promotion of inter-creditor agreements facilitated by central banks; (iii) regulation of workouts in the insolvency legislation, even providing workouts with various tools existing in formal reorganization procedures. Likewise, as a means to further incentivise workouts, countries may adopt various changes in the regulatory framework for businesses, including changes in the tax legislation, amendments to the rules governing directors’ duties and liability in the zone of insolvency, and changes in the regulatory framework for financial institutions. This panel will discuss the most effective strategies to promote workouts, as well as the country-specific and firm-specific factors that may affect the design and effectiveness of these strategies.

Panel 2: Hybrid Procedures and Formal Insolvency Proceedings
Countries around the world design insolvency proceedings very differently. For example, while certain jurisdictions have a single-entry insolvency process that may end up with a reorganization plan, a going concern sale or a piecemeal liquidation, other jurisdictions provide various insolvency proceedings – at least one of them primarily focused on reorganization and at least another one primarily focused on liquidation. Additionally, many jurisdictions provide hybrid procedures, such as a scheme of arrangement, preventive restructuring frameworks and pre-packs, that facilitate a debt restructuring – generally when a company is not formally insolvent yet. This panel will discuss the most desirable way to design an insolvency and restructuring framework, with particular emphasis on the type of procedures that should be ideally adopted taking into account the market and institutional environment existing in a country.

Panel 5: Valuation of Assets and Treatment Claims and Contracts in Insolvency Proceedings
An insolvency proceeding should maximize the returns to creditors by promoting the most efficient allocation of the debtor’s assets. Therefore, valuation will play an essential role when determining the fate of a financially distressed firm. Additionally, creditors should be paid according to a set of contractual and statutory priorities. To that end, while some jurisdictions only respect (if so) the preferential treatment of secured creditors and most unsecured creditors are paid pari passu, other jurisdictions provide a preferential treatment to certain creditors such as tax authorities, employees, and tort claimants, and some legislations subordinate certain claims such as shareholder loans. This panel will discuss the most desirable way to determine the valuation and treatment of assets and claims in insolvency proceedings. It will also discuss the treatment of contracts in insolvency and restructuring proceedings, with particular emphasis on the contracts in which none of the parties have materially performed their contractual obligations (“executory contracts”) and contractual provisions allowing a party to terminate the contract if the counterparty becomes insolvent (“ipso facto clauses”).

Panel 7. Avoidance Actions
Most insolvency jurisdictions include provisions that facilitate the avoidance of certain transactions entered into by a debtor prior to the commencement of an insolvency proceeding. These transactions seek to prevent or otherwise reverse transactions that can be detrimental for the creditors. Despite the benefits eventually created by these mechanisms, the use –and even existence– of avoidance actions is not costless. On the one hand, the initiation of these actions may generate litigation costs. On the other hand, the existence of avoidance provisions may harm predictability and legal certainty, especially in jurisdictions where it is relatively easy to avoid a transaction, usually because bad faith is not required, the lookback period for the avoidance of transactions is too long, or no financial conditions are required to avoid a transaction.  This panel will discuss how countries should design avoidance provisions taking into account the conflicting policy goals often existing in the design of avoidance actions as well as the particular features of a country.

Panel 8. Insolvency Frameworks for Individuals and Micro and Small Enterprises
Micro and small enterprises (MSEs) represent the vast majority of businesses in most countries around the world. Despite the economic relevance of small businesses, most insolvency jurisdictions in Asia – and elsewhere– do not provide suitable insolvency frameworks for MSEs. This panel analyses how countries can adopt more attractive insolvency frameworks for small businesses. To that end, it will take into account the approaches that have been adopted by various jurisdictions, as well as the policy recommendations suggested by organisations such as the World Bank, UNCITRAL, and the International Insolvency Institute/Asian Business Law Institute. Moreover, it will discuss how these approaches and policy recommendations should be adjusted to different market and institutional environments. Lastly, this panel will discuss whether and, if so, under which conditions, countries should provide a discharge of debt for consumers and individual entrepreneurs.

Panel 9. Rescue Financing and Administrative Expenses
When a firm becomes insolvent, it may be unable to obtain new finance. As a result, the lack of finance may lead to the loss of suppliers, investment opportunities and going concern value. To address this problem, several jurisdictions around the world have adopted a system of rescue or debtor-in-possession (“DIP”) financing that seeks to encourage lenders to extend credit to viable but financially distressed firms. This is incentivized by providing DIP lenders with various forms of priority. This panel will discuss the most desirable way to facilitate post-petition financing to viable but insolvent firms. Moreover, it will do so taking into account the particular market and institutional environment existing in a country.

Panel 11. Cross-Border Insolvency
Many businesses nowadays have assets, creditors, offices, subsidiaries, clients or employees in different jurisdictions. The existence of an international component may add an additional layer of complexity to a situation of financial distress. To deal with a situation of insolvency with an cross-border element, commentators have generally suggested two different approach: one of them that seeks to promote a single forum for the management of the insolvency proceeding (“universalism”) and another approach consisting of the opening of insolvency proceedings in those jurisdictions where the debtor has assets and creditors (“territorialism”). The disadvantages of both models led to some intermediate approaches. To that end, the most successful model has been the so-called “modified universalism”, which was the approach embraced by the UNCITRAL Model Law on Cross-Border Insolvency adopted in many jurisdictions around the world. This panel will discuss various approaches to deal with cross-border insolvency. These approaches will include modified versions of universalism and territorialism, as well as innovative contractual approaches suggested in the academic literature. It will also discuss new trends and developments in cross-border insolvency, including the use of insolvency protocols, the guidelines and modalities enacted by the Judicial Insolvency Network, and the UNCITRAL Model Law on Model Law on Recognition and Enforcement of Insolvency-Related Judgments